Three Thoughts on My Sabbatical

If you follow me on Instagram, surely you’ve noticed that for the period between July 15th and September 15th, I was posting daily highlights on my Story.

During this dumpster fire of a year, I went ahead and took a two-month sabbatical to rest and realign myself with what’s essential in life.

Since then, I often get questions of how did I manage to get a sabbatical, or if it worked in making me feel rested and relaxed. This post is me trying to answer some of these questions. 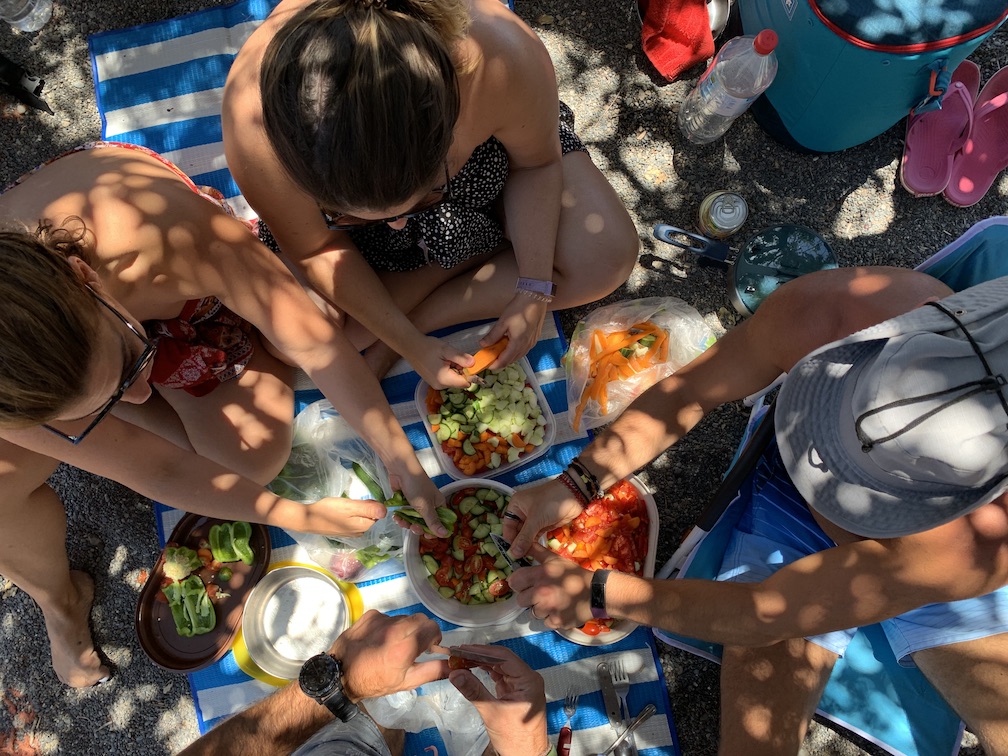 Preparing lunch on the beach was a group activity

How did I do this?

Workable, among other lovely perks, offers the chance to get a three-month-long sabbatical after five years of being with the company. (Psst! We’re hiring.)

The thought lingered. It was a great chance to spend an uninterrupted amount of time off work, without panicking about being unemployed and finding something else soon.

I was the first person at Workable to request a sabbatical, which makes sense since I was also the first employee back in 2012. I initially asked for a sabbatical in January, and then I reevaluated my request in June, shaving a month off of the initial three. I deliberately planned it so that it’d happen during a particularly slow time of the year (July-August), which also happens to be the best time of the year to spend in Crete.

When my request got approved, I communicated the decision to my team, letting them know that I was very sure about their skills and autonomy during those two months. Having a range of experienced leaders in my team paid off: I could delegate my tasks and be confident that nothing slipped through the cracks during my absence.

On my last day, after saying my brief goodbyes, I removed Slack from my phone and disabled my work email on all my machines, to resist the urge to “just check-in”. Just like that, two lazy months off spread in front of me. 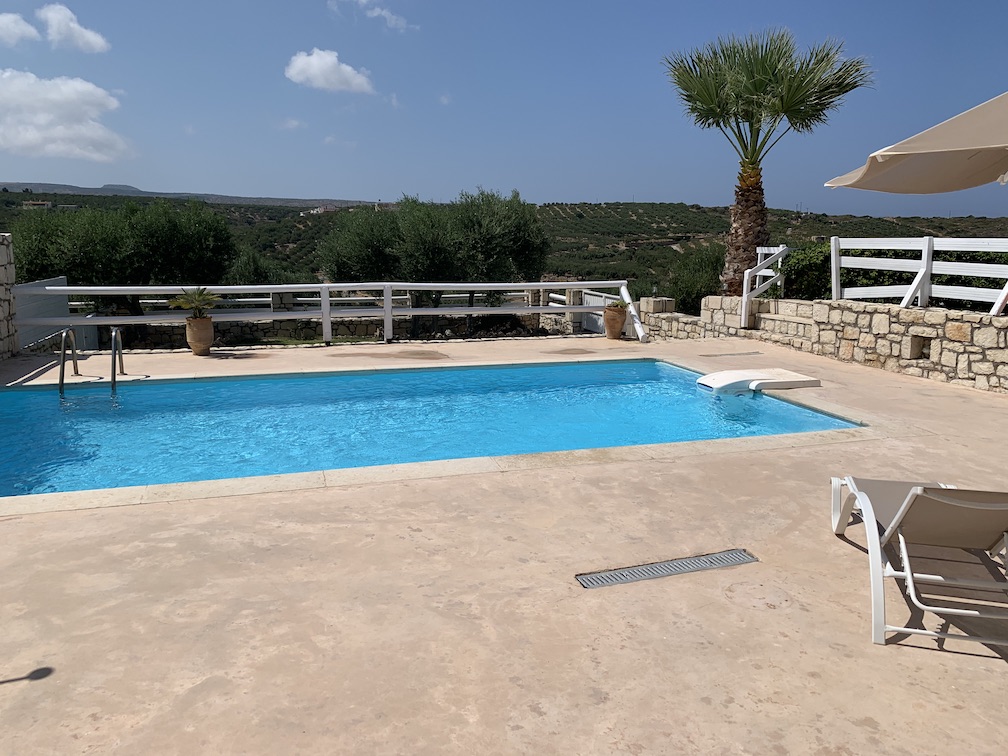 Private pool? Who's gonna say no? It's your sabbatical.

“But what did you do all day?”

Quite a lot of people asked me why I “wasted” the sabbatical perk during a hellish year that, frankly, leaves a lot to be desired in terms of calm and escapism.

The answer is deeply personal. I’m not a patient person, never was. It’s the reason why I have a million hobbies which I cycle through when I get bored with my lack of progress. Waiting for two to three years just for the world to stabilise itself enough, only to go for that dream US road trip wouldn’t cut it.

I wanted to rest, and I was OK with doing that from the comfort of my own home. Crete is not an unpleasant place for a staycation. Moreover, I was lucky enough to have already gone to two transatlantic trips right at the start of the year: Cuba and Northern California.

So what did I do? My sabbatical was the right mix of some light travelling to Athens, relaxed weeks at home and free camping. I spent most of my days at the beach, either by visiting nearby beaches every afternoon or sleeping on a hammock under the stars.

It was glorious. And I have thoughts. 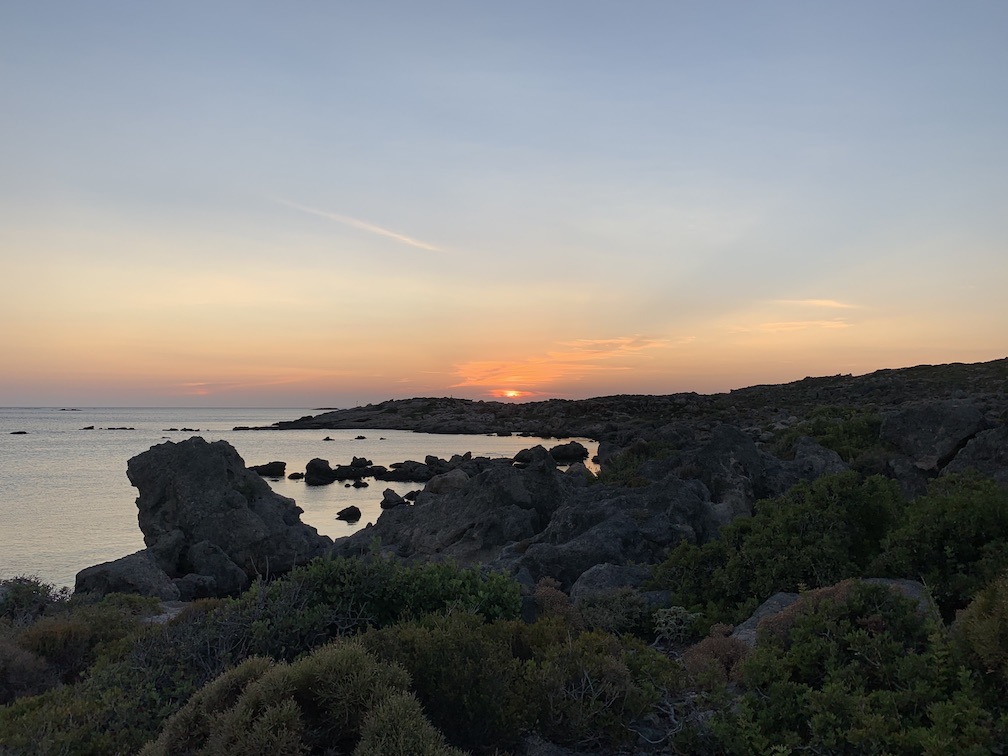 Sunset in my favourite place in the whole wide world

Thought #1: I didn’t feel a burning desire to work

I understand this might be highly personal, of course. But work didn’t really cross my mind on a daily basis. At some point, I realised there has been weeks since I last thought about work.

A bit of a psychological backstory first. During the first quarantine period in March, I got in a bizarre mindset. I decided that I would emerge from the quarantine period the healthiest, most productive, most grounded person. Mind the “-est” and “most” there. I went all in, regarding everything: daily workouts, multiple Coursera courses, reading three books simultaneously, Headspace meditation, you name it. Call it a Type A personality or ~typical Capricorn vibes~; I was determined to make 👏 quarantine 👏 my 👏 bitch.

Mind you; it’s not that I had extra time to do all these. I was one of the lucky ones that kept my job throughout the coronavirus crisis, so I worked the same hours as usual. This manic behaviour worked in some ways (I scored in the top 5% of women my age in my Nike Training Club benchmark) and spectacularly failed in others (I still mostly fall asleep during meditation).

During the sabbatical, it was a blessing to be able to just be, without justifying my existence by being useful and productive all the time. I found that I could be productive in other ways: Spending time with friends. Doing chores. Cooking meals and reading books and listening to music and optimising my packing for weeks of sleeping under the stars.

It was a relief and a blessing, and I feel grateful for that. 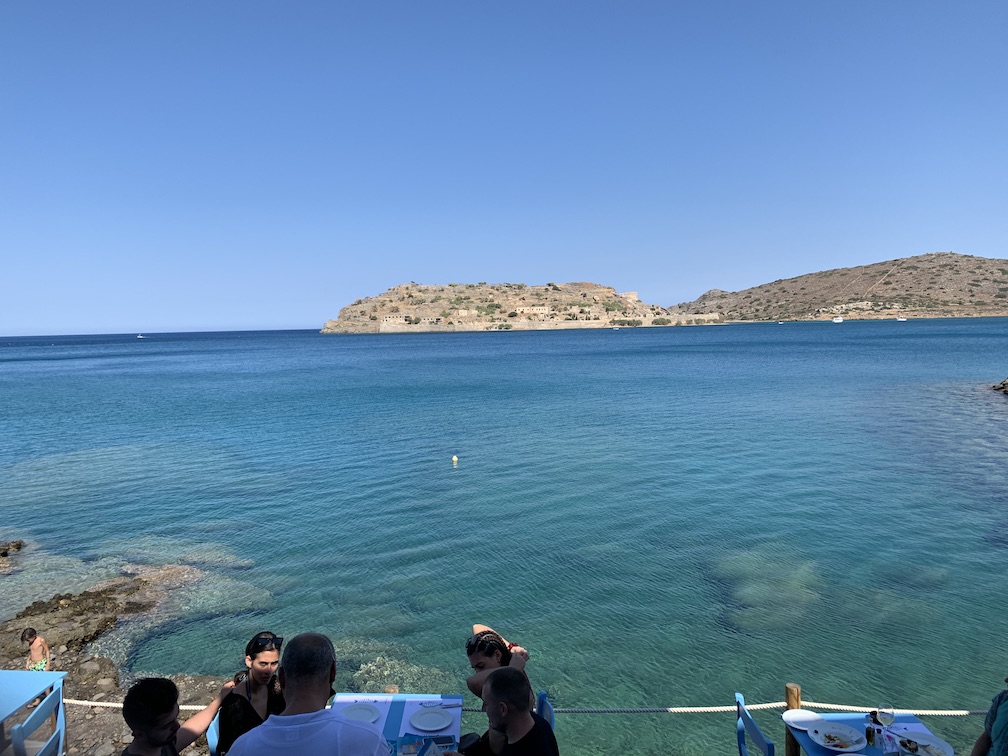 Thought #2: I realised anew that I am not my work

The tech industry is my home. I’ve never had the chance to work outside tech; my first interview was for a Web Developer position.

I take great pride in my work, and I have the annoying habit of not setting clear boundaries between me as a professional and me as a human being. Where does my work end, and where does my personality start?

During the first few weeks of my sabbatical, I was ready to feel like a big part of myself has gone missing. Instead, nothing: I kept being me. People around me didn’t change the way they thought about me or talked to me just because I didn’t work.

It might all sound obvious to some of you, but after eight years working for the same company, and 15 years of working in the same industry, it’s not. 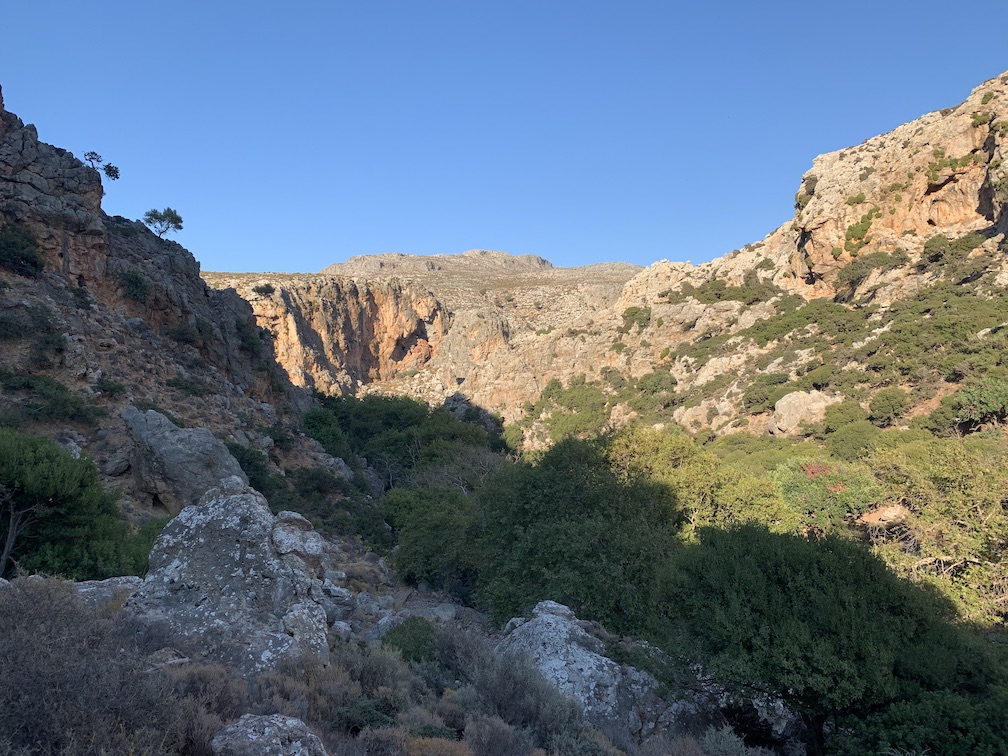 Hiking in canyons seemed to be a theme for 2020

When you’re planning for your sabbatical, even when it’s a relaxed staycation like mine, you tend to overestimate your energy levels and free time. I kept getting questions like “Two whole months off? What will you do with all that free time?”

I have a concrete example regarding this. Right at the beginning of summer, I started working on what later became my Remote Management webinar, with the lovely team over at Bizrupt . When I finalised my two-month time off, I figured, what better time to work on the content for my webinar, right?

Wrong. On my first day of “OK everyone is working, what should I do now?”, I put in some effort and worked on the outline of my talk. I pushed myself to think that I was content to be productive again and to have the time to work on a personal project that genuinely mattered to me.

But then, the lazy days of August rolled in, and I realised about halfway in that I shouldn’t sacrifice those rare, slow two months to stress about something I would worry about later anyway.

The initial date for my webinar was in mid-September, and I decided to delay it for a month, to have the time to work on it after my return. 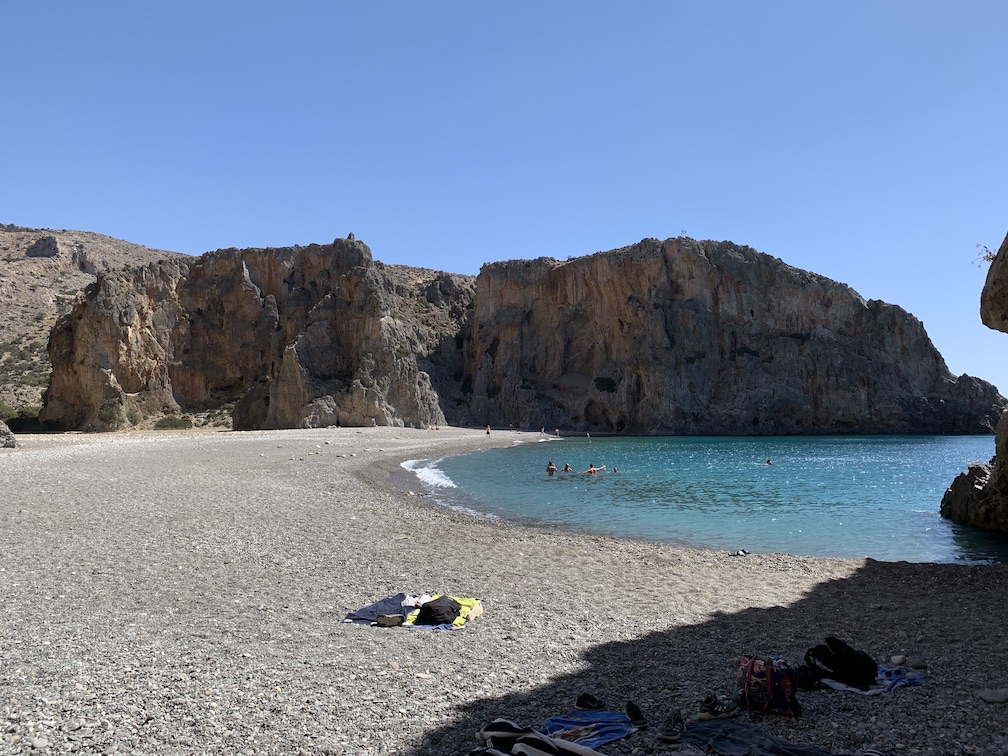 If you thought August in Crete was pretty, wait till you see September

You have to be prepared to reconsider your relationship with your job and with work in general. I love my job, and even I became a bona fide work critic. Surprising feelings might bubble up, and you might come to conclusions that you never thought you would ever consider.

If you decide to take the plunge, I’d advise going cold turkey: right when the clock turns, stop thinking about work altogether. Don’t try to force productivity during your time off, because you’ll make promises to yourself you won’t be able to fulfil. Your mindset and your thoughts about working will completely change after a while, and it’s best to err towards sloth. You’re supposed to be relaxing, after all.

However, if you’re thinking about it, turning the idea over in your head, you already know the answer. Ask for that damn sabbatical.

← Previous article
How to Onboard Remote Team Members
Next article →
Brace Yourselves, Performance Reviews Are Coming!